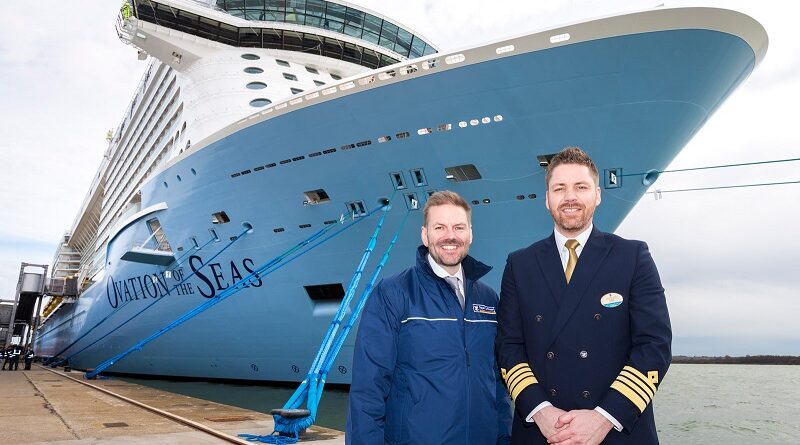 By the time you read this, Harmony of the Seas – the largest cruise ship in the world – will have set sail. Back in April however, our heads were being turned by Royal Caribbean International’s first new arrival of the year.

Ovation of the Seas is the third ship in Royal Caribbean’s innovative Quantum-class fleet, joining siblings Quantum of the Seas and Anthem of the Seas in offering all-out action on the oceans. Like its sister ships, Ovation of the Seas offers activities that aren’t for the faint hearted; skydiving, surfing and rock climbing aren’t traditionally associated with cruising but they’re a sure thing if you’re looking for a good time. The Bolsover Cruise Club Marketing department headed to Southampton, keen for a closer look at cruising’s new arrival.

Nothing brightens a grey April day quite like a multi-coloured waterpark or the neon lights of the North Star, so we headed to the Pool Deck the minute we boarded Ovation of the Seas. The smell of oriental noodles wafted under our nostrils as we arrived, emanating from a new Kung Fu Panda restaurant that has replaced signature poolside joint, Johnny Rockets. Although we had arrived a little too soon to witness their arrival, another panda and her clambering cub would soon take a starring role on board, perched at the very top of the ship, as Ovation’s larger than life mascots. A strong panda presence, along with Chinese signage around the ship and a substantially larger casino, were the only noticeable alterations to the Quantum class concept that served to remind us that Ovation of the Seas was ultimately intended for an Asian audience.

The North Star never ceases to amaze, though its appeal is undoubtedly greater over a beach and seascape than from 300ft above Southampton’s industrial docks. Also found on the Pool Deck is Splashaway Bay, its multi-coloured slides promising to excite the kids to such an extent that they’ll undoubtedly have to be prised away come tea time. It’s no mean feat leaving the main pool either, where an outdoor movie screen, hot tub and the Pool Bar provide plenty to keep you occupied. Serenity seekers can head to the Solarium; occupying a sizeable area at the very front of the ship, this palm-tree scattered haven of relaxation features whirlpool spas, a three-tiered swimming pool and plenty of those plush shaded cabanas you always read about in the holiday brochures. Lazing away an entire day doesn’t half work up an appetite, something they’re happy to address at the chic Solarium Bistro. Throw in cocktails from the Sunshine Bar and you could quite easily hideaway there for days on end.

Royal Caribbean’s ships have this strange ability to inspire you to relive your youth. Head to the SeaPlex arena and you’ll find yourself slipping into the seat of a bumper car or lacing up your roller skates before you know it. We did both, before refuelling with huge hotdogs laden with toppings from the SeaPlex Dog House. Sadly, being a fully-fledged adult means we wouldn’t stand a chance in other areas on board; too technologically challenged to while away hours in an enormous Games Room full of Xbox’s and PlayStations, and not nearly cool enough to join the teens in their dedicated nightclub, Fuel. ‘Bored’ isn’t a word you encounter on a Royal Caribbean cruise and Ovation of the Seas isn’t any different. Multi-coloured climbing walls, RipCord skydiving simulators and FlowRider surf simulators probably won’t appeal to lovers of traditional cruising but are welcome ground breaking developments for families that cruise; how many land-based resorts offer fun facilities that are comparable, not to mention a new destination almost every day? The way to a Into The Blue employee’s heart is through their stomach and the dining options offered aboard Ovation of the Seas certainly hit the spot. Royal Caribbean is as famous for food as it is for fun and from late night pizza at Sorrento’s, to avocado and fresh crab ice cream cones at the fantastical Wonderland and seafood velouté at the exclusive Coastal Kitchen; the ship deserves a standing Jamie’s Italian ovation for its culinary offerings alone. After nibbling on sushi at Izumi, salmon and cream cheese tarts in the Windjammer Marketplace and goat’s cheese crostini at Jamie’s Italian, we barely had room for our evening meal at Silk, one of the ship’s complimentary dining rooms. We battled on in the name of research, loosening our belts and tucking into a taster menu that combined various dishes from each complimentary restaurant on board; we opted for seared tuna tataki, grilled filet mignon and good old apple pie, in case you were wondering. Later on, we shimmied to the live samba that flowed out of Bolero’s bar, past which we had wandered on route to the Music Hall. Here, we found ultimate eighties tribute band, the Wild Boys, filling the ears of revellers with the kind of 80’s classics we all loved back in the day. Madonna, Bon Jovi and Tiffany all popped up on the track list, the Music Hall’s plush velvet seating, epic chandelier and enormous dancefloor providing the perfect backdrop to the retro party atmosphere. Later, the more vocally gifted amongst us headed back to Bolero’s for karaoke, whilst others grabbed a maroon leather clad booth in Michael’s Genuine Pub. The following morning we disembarked from Ovation of the Seas into a foggy Southampton, something that seemed somewhat symbolic of having to leave the fun behind. A single night on board had been enough to convince us all that Ovation of the Seas holds the same secret ingredient as Royal Caribbean’s other ships, successfully imparting the fun factor into cruising. If you’re gathering the family for some precious time away, and want a holiday where the older kids won’t complain at being torn away from their Xbox and the younger ones can play safely under the sun whilst you relax with a book, before experiencing some of the best food and entertainment you’ve ever enjoyed, then Royal Caribbean’s cruising concept is the one for you. Following a handful of short sailings in Europe, Ovation of the Seas will head down under, starting her inaugural season in Australia before she finally settles at her homeport of Tianjin. For those embarking on adventures in the Far East, she promises to be an exciting host. 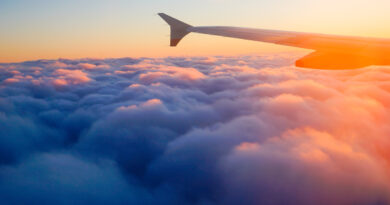 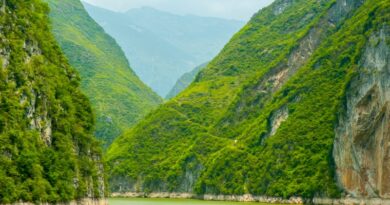 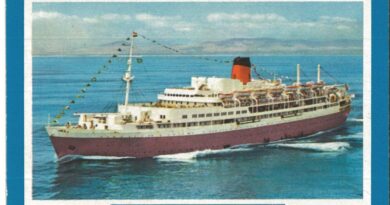